The past couple weeks have contained a couple WNY adventures.  I’m truly enjoying the time I’ve gotten to explore this area that’s new to me.  This blog title includes the phrase “#2” in hopes that there will be many more adventures to blog about throughout my time here. (and I’m counting my trip to the Buffalo Italian Festival as #1 even though it’s not labeled that way) In any case, HERE WE GO (and yes… a lot of adventures means a lot of writing… if you haven’t figured it out by now, that’s just how I work):

Two weeks ago Darcy invited me to Shakespeare in Delaware Park.  Every summer one of the parks in Buffalo puts on presentations of Shakespeare’s works for free most nights of the week.  We caught a showing of Macbeth.  Quite the creepy story, but the actresses did a wonderful job.  Yes, I just mentioned ACTRESSES not actors as the entire cast was female.  It was an interesting twist on the fact that originally the play would have been a fully male cast, but it made for a fun opportunity for more females to be involved in the show (swordfights and all!).  Here are some pictures from that night: 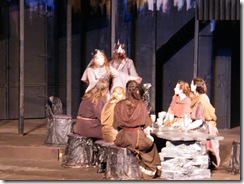 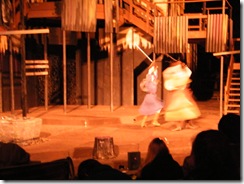 So that was last Thursday night.  Then earlier this week (on Monday, my day off) a met up with a friend from school who’s lived in the area since he was in high school.  He had an entire tour of Niagara county planned out and I’m not sure how we packed it all in one day.  I was amazed at how much farmland and even CORNFIELDS there are out here.  Seriously, for a while I thought I might actually be back in Nebraska.  Here’s how the day unfolded:

Mark picked me up in time to grab lunch at The Silo in Lewiston. The Silo is just a typical burger/sandwich place but the restaurant happens to be in an old coal silo along the Niagara River. It has a beautiful view of the river (and appears to be a busy fishing spot).  It was a gorgeous day to sit out side and enjoy lunch. 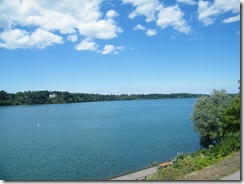 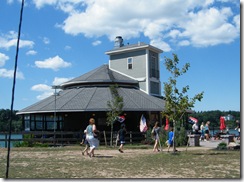 The day continued and we headed North.  We passed by Mark’s summer vicarage church and went on up to Wilson-Tuscarora State Park along Lake Ontario.  Here we went our separate ways and spent some time alone with the amazing God who created the beautiful sight we were seeing.  It was awesome to look out, unable to see anything but water and realize just how big God is.  It made me also think of that passage when Jesus calms the storm and the disciples exclaim, “Who is this that even the wind and the waves obey him?!?”  (If you look closely at the first picture you can see a sailboat). 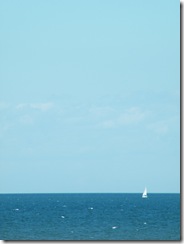 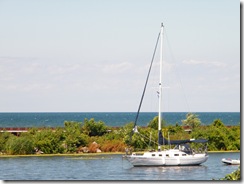 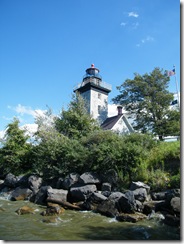 After a short drive through many more fields, farms, and vineyards we arrived at a similar sight further down on Lake Ontario.  This was at Golden Hill State Park which is exactly 30 miles from Niagara Falls marked by the Thirty Mile Point Lighthouse” which we toured.      It was awesome to stand at the top of the lighthouse, getting beaten around by the intense wind coming off the lake and once again look out at God’s creation and be at awe.  That’s not to mention that I think we

made the day for elderly woman who got to give a tour of the lighthouse to some “young people.”

The day continued with many more adventures.  We crossed briefly over into Orleans county and visited an Amish Store called Yoder’s Country Cupboard where I got some fun homemade candy as well as fresh homemade peanut butter.

Okay, so this next part I have to explain a little more for those of you that aren’t familiar with Western New York (WNY).  What the rest of the country calls “Buffalo Wings” aren’t real wings at all.  CHICKEN wings are originally from Buffalo, NY (hence where were got the name in the rest of the country) and everyone has their favorite place which they claim has “the best wings (or

fingers) in Western New York.”  Well, another claim was made and we ventured off to Mr. Ed’s in Middleport.  (I have not had enough experience trying wings or fingers to be able to judge any claims but Mr. Ed’s did have some good fingers).  We picked up the fingers and headed to a picnic table by the canal to eat them… yep… the Erie Canal that most midwesterners have only heard about in history books. As we were driving away from Middleport I even got to experience one of the bridges going up to allow a boat to go underneath.  (If you look on the left side you’ll notice that even when the bridge is up, there is still a “sidewalk” for people to walk across the canal.)

As our journey continued through Gasport and onto Lockport (yea, all the “ports” along the canal), I started to get a little worried.  Mark commented, “And now get ready to have a true Western New York experience.”  He pulled into a parking lot with a Reid’s hotdog stand, handed me some money and said, “Go order…. Good luck!”  Now, even more petrified than before I walked up to the 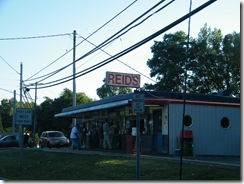 stand and was a little confused.  Sure, I could figured out what a Shake was or that “Hamburg” means “Hamburger” and “Cheeseburg” means “Cheeseburg”  I figured all the ones with “Hot” in them were hot dogs but what’s the difference between a “Red Hot”, a “White Hot”, or a “Hot Ham”? And did I want the special “Reid’s” sauce… I have no clue.  I ended up ordering a Red Hot with fries and a strawberry shake which the cashier called back to the cooks as a “Red Fry Straw”.  Mark got some extra onion rings with the special sauce so I could try it too.  It was pretty good and as he said… quite the experience… complete with pigeons and everything.

The day wrapped up with a few more stops at a vineyard, that was closed, the Lockport Cruise Night (basically a weekly car show…. a lot of the towns up here have them), before heading back to my home in Amherst pointing out the “cheapest gas station in Niagara county” (apart from “the Res”), the drive-in movie theater, and Niagara produce along the way.

What a wonderful, joyfulllyblessed day in Western New York.  Now all of you just need to come visit me so I can take you to these wonderful places as well!

Well, that’s all I have for now.  I’m super excited for this weekend …. I get a chance to share my stories about Africa at the VBS reunion and my aunt and uncle from IL are going to stop through on Sunday after an impromptu vacation to Niagara Falls.