As much as I sadly sometimes try to ignore it and go on with my “normal” life here in America, there is no doubting that part of my heart remains in Africa.  I may have only lived there one month, but in that short time, I experienced things and gave of myself in ways that leave me forever changed.  The richness of faith in light of physical poverty, the immense joy in the midst of unthinkably difficult life situations, the perseverance long past when I would just give up–these are the things I witnessed within people that make it impossible to just “walk away” and return to “life as normal.”

One of those courageous people is my dear friend Nsubuga Emmanuel, or “Emma” for short.  When I met Emma at the children’s home where I spent my days, I was blown away by his faith and trust in God despite an unspeakable life story.  He went to school across

town but stayed each night at the orphanage after having to flee his home when his stepfather tried to kill him.

I remember shortly after arriving, Emma was talking with me in the library of the orphanage.  On the wall was a giant world map.  We had so much fun looking at where I grew up and where I would be moving to upon my arrival back in the United States.  And then, we simply sat their in awe and silence at the greatness of our God… One that knew each of us personally, where we came from, where we were going… One that held that entire world in His hand.

Today, I sit here yet again in awe.  This time, I’m not so much in awe of God and his goodness, but rather, I’m struck by how sinful and broken our world is.  In a conversation I had online with Emma yesterday he described a situation far outside our ability to comprehend here in America… a situation in which he, as a high school student struggling to support himself and finish school, is also having to sit down with leaders from multiple clans to make major life-changing decisions.  And by life-changing, I really mean that people LIVES are on the line.

As a son, his heart is filled with the responsibility and passion to care for his mother, struggling in her battle to fight against HIV, and his younger siblings.  He also realizes that fighting for what belongs to them, could mean the loss of lives for them or others.  As a Christian, he struggles to reconcile these issues.

He relies on the One who can figure this all out.

Despite their right to the land, he decides to sell it to avoid bloodshed and use the money to rebuild a home for his family somewhere else.  He helps his mother set up a store to create a form of income to pay for her expensive medicines and their daily needs.  He finds people to help rebuild a house.  He continues to navigate through life trying not to fear the tribal conflicts and simply do what’s right.  He is determined to continue to get his education in order to be able to find a good job and care for his family.  He does all this while currently suffering from malaria and various other health problems himself. 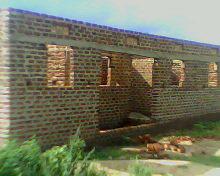 Today, I ask you to join me in praying for this amazing brother in Christ.  They were able to get a good start on the house on the new land (pictured on the right) however, the money they had from selling the land was not enough to complete the roof and the floor of the house.  The store they started will create enough income to finish the house in 7 or 8 months (which is actually amazing in itself) but they only have one month before they must be off the old land and out of the house.  I can’t help but think about the miracles series we just concluded at First Trinity as I ask you to pray that God would do the miraculous in this situation and that God’s power would be shown:

Thanks in advance for your prayers for this amazing young man, his family, and his community… it means a lot to him… and to me.

(Feel free to leave prayers and notes of encouragement to Emma and his family in the comments and I’ll make sure he gets them.)

4 thoughts on “Africa On My Heart…”