“We have not been this way before.”

I woke up this morning with this phrase in my head. There is no denying God was trying to speak truth to me from the moment I had conscious thought. I’d need His presence, His leading.

It’s a phrase that’s come up a few times over the last couple of months and it actually comes from Scripture.

As the Israelites ended their wilderness wanderings and prepared to enter the promised land, a lot of change and transition was going on. Most notably, Moses died and Joshua took over leading the people.

In one sense this was the moment that their whole people group had waited decades for, longing to enter the promised land. What should have been a journey counted in days, ended up being 40 years of wandering in the wilderness because of doubt and disobedience. All of the initial generation died and now, at the beginning of the book of Joshua, the next generation prepares to walk into this amazing land and life that God has prepared for them.

But they weren’t so sure, and God knew it. To actually claim this land that God said belonged to them wouldn’t be easy. There would be battles on every side, towns to take over, armies to overcome. And before they even got to that, they’d have to literally walk through a river. I’m sure some of them were tempted to say, “you know maybe the wilderness isn’t so bad.”

The baton had been passed from Moses to Joshua. God had spoken his command (over and over) to “Be strong and courageous” and trust that God was with them wherever they went (Joshua 1). The spies had snuck in and determined that the people of the land were actually scared of the Israelites. Rahab, who protected them, said herself, “I know that the Lord has given you this land.” (Joshua 2). The spies report back and the next morning, it was finally time.

Time to move. Time to take that first step into the new life God had for them.

They headed to the river and prepared for what was next. Three days they waited at the river and then God gave these directions to His people through their leaders:

“When you see the ark of the covenant of the Lord your God, and the Levitical priests carrying it, you are to move out from your positions and follow it. Then you will know which way to go, since you have never been this way before…” (Joshua 3:3-4)

The ark of the covenant was a physical representation of God’s presence among His people. With the ark out in front, it was clear where to go, which steps to take. It was as if God was saying, “Keep your eyes locked in on Me! You haven’t traveled here before. You haven’t done this, so let Me lead.”

This verse has been such a great reminder to me in recent weeks.

At times I felt so much pressure to “do this season right.” While I’ve learned over the years what it looks like to live and walk in grace, Satan was pushing ALL my perfectionist buttons. I wanted to end well in Buffalo, to finish strong, but I often messed things up in the process. In those moments God reminded, “Bekah, you have not been this way before. Keep your eyes locked in on me. It will be okay.”

I looked around at some friends going through some of the hardest moments of their lives and struggled to figure out how God was calling me to leave in the midst of it. I wrestled with how these relationships might look different in the way I support them than they have for the last nine years. Again, “Bekah, you have not been this way before. Keep your eyes locked in on me.”

My announcement to leave First Trinity left our church wondering, “What’s next?”. We were already anticipating a lot of transition in the years ahead, but this wasn’t one of the anticipated changes. I see them navigating it so well and am excited to see the beginnings of what God is up to, but also sad that I won’t get to be part of it. He calls to all of us in those moments, “You have not been this way before. Keep your eyes locked in on me. I will lead you.”

And on this day, my final day in Buffalo, it is such grace to wake with those words first on my mind:

“We have not been this way before.”

I’ve lived my whole post-college adult life here in Buffalo. This is what I know. This is where I’ve discovered my own identity and settled into life. I have family here and connections in the community. I was excited to dig roots in even deeper buying a house. And now so much changes.

This new job is different. While ministry is ministry, ministry in a congregational setting is very different than in higher ed world. There will be many things I don’t know and have to learn and adjust to. While I went to school in Seward, to live there as a member of the community is different. To be closer to my Kansas family and farther from my New York Family brings new adventures in figuring out how to relate to people, not to mention trying to grow old and form new relationships in Nebraska. I’ll have to figure out what it’s like to be a professional church worker who doesn’t actually work at a church and just goes to worship on a weekend like a “normal” person. I’ll have to retrain my brain to actually be able to work on Mondays after 9 years of that being my day of rest and Sabbath.

I haven’t been this way before.

I don’t have to do this season perfect; I probably won’t. I don’t have to map it all out, plan and produce, act like I’ve got it all together. At times, that was the type of behavior that actually kept the Israelites wandering.

I’ve just got to lock my eyes in on the One who knows every step and has already walked it. To lean into Him as I go through the waters. To trust that while there may be some battles ahead, a time will come where there is “peace on every side” (Joshua 21:44).

And so the Israelites headed out. The priests, carrying the ark, headed toward the waters edge. Unlike in the splitting of the Red Sea that took them out of slavery, this time there was another level of trust. The waters didn’t split until they took the first step into the Jordan River. They had to get a little wet in trust, but when they did the water splitting was only the beginning of the wondrous works of God they would witness in this new land.

It’s true, I haven’t been this way before but it’s time to get my feet wet and watch what God will do! 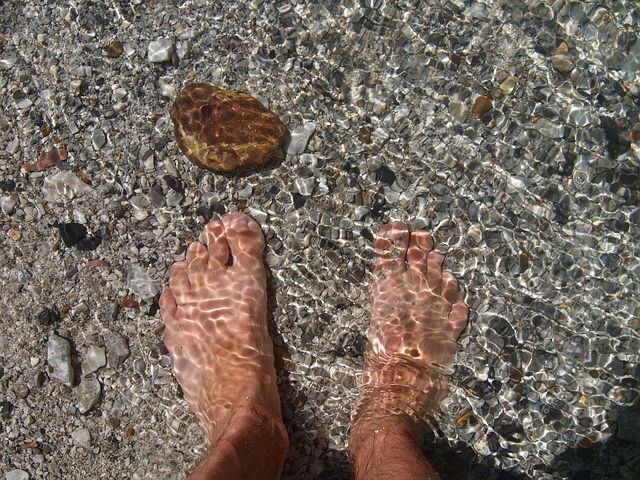 2 thoughts on “We have not been this way before.”